CelebrateLIFE! Sharing the joy of living and growing throughSpiritualist community, education and mediumship. 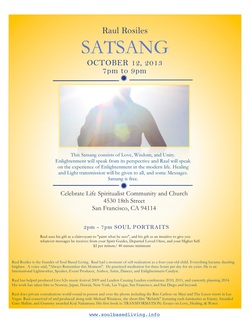 This Satsang consists of Love, Wisdom, and Unity.

Enlightenment will speak from its perspective and Raul will speak on the experience of Enlightenment in the modern life. Healing and Light transmission will be given to all, along with some Messages.

Raul Rosiles is the founder of Soul Based Living.  Raul had a moment of self-realization as a four-year-old child. Everything became dazzling brighter.  A voice said, "Always Remember this Moment".  He practiced meditation for three hours per day for six years. He is an International Lightworker, Speaker, Event Producer, Author, Artist, Dancer, and Enlightenment Catalyst.

His work has taken him to Norway, Japan, Hawaii, New York, Las Vegas, San Francisco, and San Diego and beyond.

Raul does private consultations world round in person and over the phone including the Ritz Carlton on Maui and The Luxor resort in Las Vegas. Raul conceived of and produced along with Micheal Wisnieux, the short film "Rebirth" featuring such luminaries as Emmy Awarded Gary Malkin, and Grammy awarded Koji Nakamura. His first book is: TRANSFORMATION: Essays on Love, Healing, & Water.

Join us for a joyful ceremonial gathering of mediums, spiritual healers, and those who are looking for healing, guidance, inspiration, or simply interested in having a new experience.

This candle-lit circle will be rich with prayers, songs, invocations, and healing and message giving for participants, inspired and flavored by the Espiritismo tradition of Latin America.